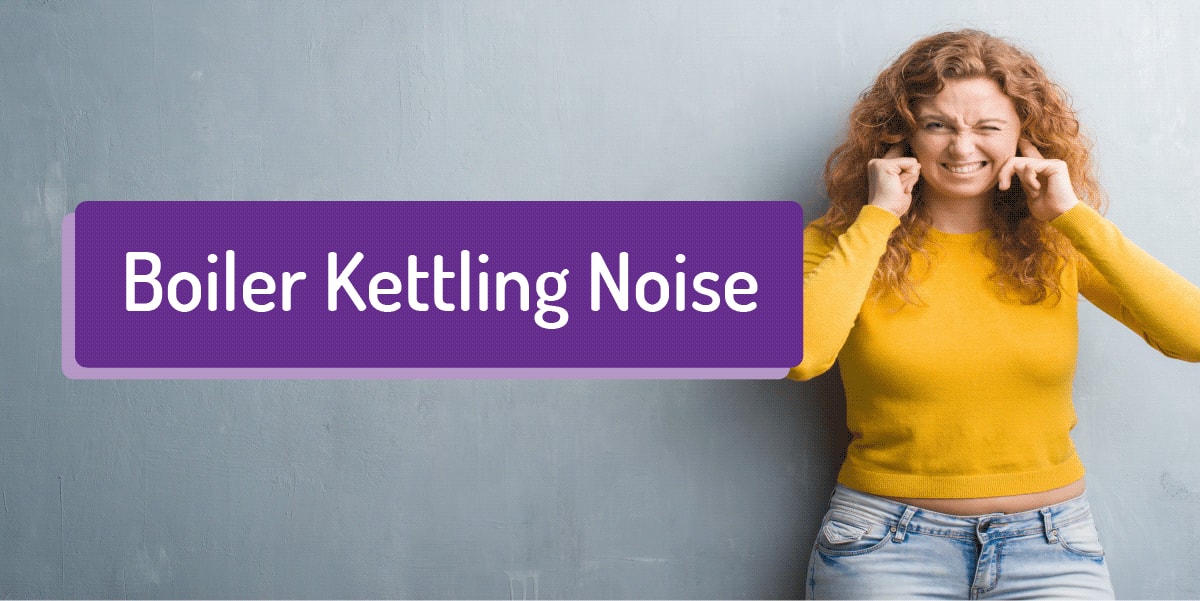 What is boiler kettling, and how do I stop the noise? 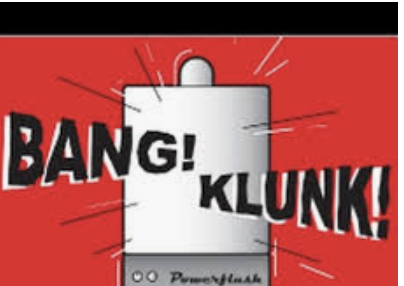 You’ll hope that everything is always working well with all aspects of your home.

When it does, you can sit back and enjoy all the fun of owning a home.

When things aren’t working so well, it’s another matter.

Of all our home’s infrastructure, it’s our boiler that we always want to ensure is working correctly.

This, after all, plays such a huge role when it comes to how comfortable are home is.

You’ll sometimes know pretty quickly if your boiler needs to be repaired or replaced (everyone hates stepping into a cold shower, after all), but sometimes things are a little more complicated.

If your boiler appears to be making a strange noise, kettling sound, then it’s understandable that you’ll want to get to the bottom of the issue.

If you discover that your boiler is popping or boiling, then what you’ve got is a clear case of ‘boiler kettling.’ In this blog, we’re going to take a look at what exactly this phenomenon is and the steps you can take to put it behind you.

So, why is your boiler kettling?

Your boiler isn’t really supposed to make any noise.

Indeed, it’s not supposed to get your attention in any way — it’s usually out of sight as well as silent, and should just do its job without any fuss. Or at least that’s the idea.

Sometimes, you will notice that your boiler is making a noise that it shouldn’t be.

The noise can make a few different noises, but the most distinct one is when it sounds like a boiling kettle.

This is where the word ‘kettling’ comes from.

Aside from being annoying to listen to, it can also be a little disconcerting. A boiler making loud noise will always raise eyebrows — is this thing planning to blow?

You’ll usually find that your boiler is singing a strange song because of:

Now we’ll look at all of these issues in more depth.

You’ve Got a Leaky System.

More often than not, you’ll find that the noise from your boiler is coming from a boiler leak.

This could be in the boiler itself or somewhere in the pipework that runs throughout your home.

While this might sound like a serious issue, at least you can check to see where the leak is coming from.

Indeed, this should be the first thing that you should do.

You can go throughout your entire system and see if you can find where the leak is coming from.

You should begin with the boiler itself, as well as the space immediately around it. It’s more likely that it’ll be there than anywhere else.

If it’s not there, then begin your investigation of the rest of the home.

You’ll want to look extra close at your radiator pipes, and indeed the radiator too — a radiator that leaks could just as easily be the cause of all the strange noises. 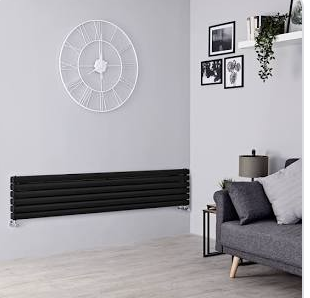 Some spots are more likely to be affected than others — for instance, the joints where pipes meet.

It’s all good and well finding the leak, but you’ll be curious as to how it happened in the first place.

There are a few ways it can happen.

It’s possible that the person that installed the pipework didn’t do the best job in the world, which would make the pipes vulnerable, to begin with.

Or it could be that there’s been too much pressure put onto the pipes.

The most common reason is probably general corrosion, which happens over a long term period.

It might sound scary to discover that you’ve got a leak, especially when your boiler is making a noise so loud that it feels like it could explode pretty soon.

But there’s no reason to panic: even though it might sound pretty darn loud, it’s not going to happen.

Boilers are really safe, and the majority of them are authorised and regulated so that they will automatically shut down the boiler before it gets anywhere close to being dangerous.

If you’ve got a leak, then it’ll need to be taken care of, of course. In some cases, it’ll be possible to repair the leak, but if it’s too big and can’t be fixed, then you’ll need to replace your boiler.

You’ve got a build-up of limescale.

There’s no reason for the water in your boiler system to be particularly clean.

It can’t be hazardous, of course, but it’s not as if you’re going to drink this water.

Alas, the water’s lack of purity does pose a different threat — it means that a build-up of limescale can happen and be a common cause of boiler problems.

Over time, all the limescale can become like sludge.

Since it has nowhere to go, it’s effectively trapped and then restricts how much water can flow.

This can cause some surface-level issues in your piping, but things become a little bit serious around the boiler’s heat exchanger.

If the sludge rests there, then there’s a chance that it can overheat and begin to stream.

This would produce the ‘kettling’ aspect — after all, it’s steam that makes the noise in a real kettle.

You’ll also find that it causes other problems, such as only heating the upper part of your radiator, and not the bottom. Indeed, this is a good way to test if that is the issue.

There’s not all that much that you can do about preventing calcium. It does, after all, occur naturally in the water.

How much water minerals pass through your boiler system will depend on where you live.

There are different amounts in different parts of the country.

If you live in a hard water area, then your water will have more minerals, and this will mean that it’s more likely that you’ll have a build-up of limescale in your boiler.

If you’re wondering whether that will be the issue, you can check with your local area.

It’s not as if you can do anything about the water if they do tell you you have hard water, though — you’ll just have to accept it.

Your heater is overheating/you have a faulty thermostat.

Things will become pretty noisy if your boiler is overheating.

The most common cause of this is a thermostat that isn’t working as it should.

There are other symptoms of overheating beyond strange noises, too.

For example, if you find that your boiler is cutting out, then you’ve probably got a case of uneven heating.

There are a few steps you can take to correct this issue.

To begin with, have a look at your thermostat settings.

You can adjust or reset them altogether if you think you know what you’re doing.

If this works then hey presto, you might just have gotten rid of the boiler kettling noise.

In every other case, you’ll need to work with an expert.

It depends how old your boiler is though. If you’ve had it for some time, then it’s likely that the thermostat has more problems — it’s a common problem that happens after a while.

In those instances, you’ll need to replace the thermostat.

While it’s nearly always possible to do this, it’s not always the most cost-effective method.

Indeed, if your boiler is 10 – 15 years old, it usually makes more sense to get a new boiler installed.

If your home is too hot or cold even when you alter the thermostat, then your home will not be at your ideal room temperature.

If this is the case, your heating is not working as you wish and it needs sorting.

How can you stop boiler kettling and other noises?

There are only a couple of ways that you can get rid of boiler noises all on your own.

You might be able to fix a broken thermostat, and you can always bleed the radiator to help the flow rate.

Both of these things might solve the issue, but if they don’t, then you’ll need to work with an expert.

They’ll have the knowledge and expertise needed to locate the cause of the problem and fix it.

It could be as simple as deposits on the heat exchanger or the gas burner pressure, for example, something that you can’t fix yourself.

There are plenty of components to a leak that the professional will consider.

It’ll be easier to fix if the leak comes from an external part that is easily accessible and if it’s coming from something straightforward, such as a seal that is now faulty.

It’s a different matter if the leak is internal.

This can happen when there’s a corroded part of the boiler. These problems are harder to diagnose and fix and thus take a little more time.

It’s also more likely that a replacement boiler will be recommended rather than a repair job. 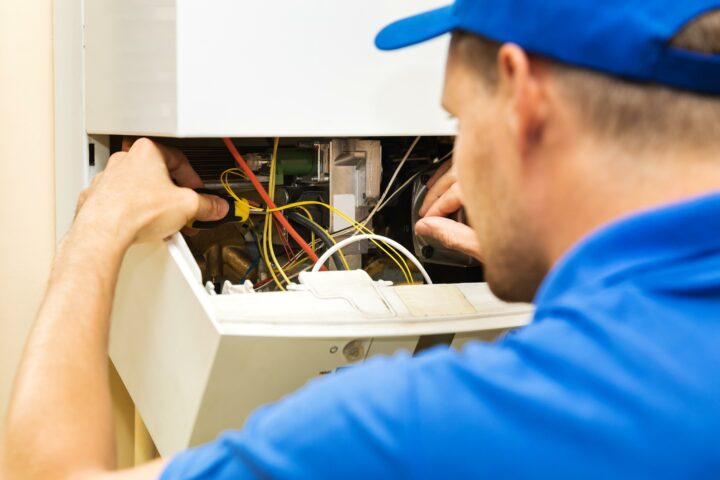 If there’s a limescale problem, then the issue will be handled with either a chemical clean solution or a power-flush.

These are both ways to blast away the limescale.

Take a look at your manual to see if there’s a way to fix an inaccurate thermostat yourself.

Your boiler may not be providing hot water, or it may not be at the ideal temperature. If that doesn’t work, then you’ll need to hire a professional to fix the problem for you.

Still unsure? If your boiler is kettling and you need assistance from a professional, you may be best calling a Gas Safe boiler engineer to come and take a look.

Boiler kettling repair is relatively inexpensive and should cost between £75 – £300 dependent on the company used for the call out.

These costs to repair your kettling banging nose vary by location and company used as well as the time of day.

It would be a good idea to sign up to a home boiler cover plan such as the ones offered by UK Home Cover.

You can get boiler cover from £7.99 per month for basic cover through to their top of the range plan that costs £26.99 per month.

They usually have a special offer on where you can pay £99 upfront today, and then sign up to their £26.99 plan. Click here to view and sign up.

So, if you can stomach the repair cost for your boiler kettling noise, then go ahead and get it repaired.

If you think you need a new boiler as you have struggled with your heating and hot water for a few years, then contact Boiler Central to get a fixed price.

You can even spread the cost of your new boiler with finance.

Most boiler companies registered in England are regulated by the financial conduct authority or FCA so you can get boiler finance.

If you are having problems with your boiler or feel you are ready for a replacement or new boiler, click here