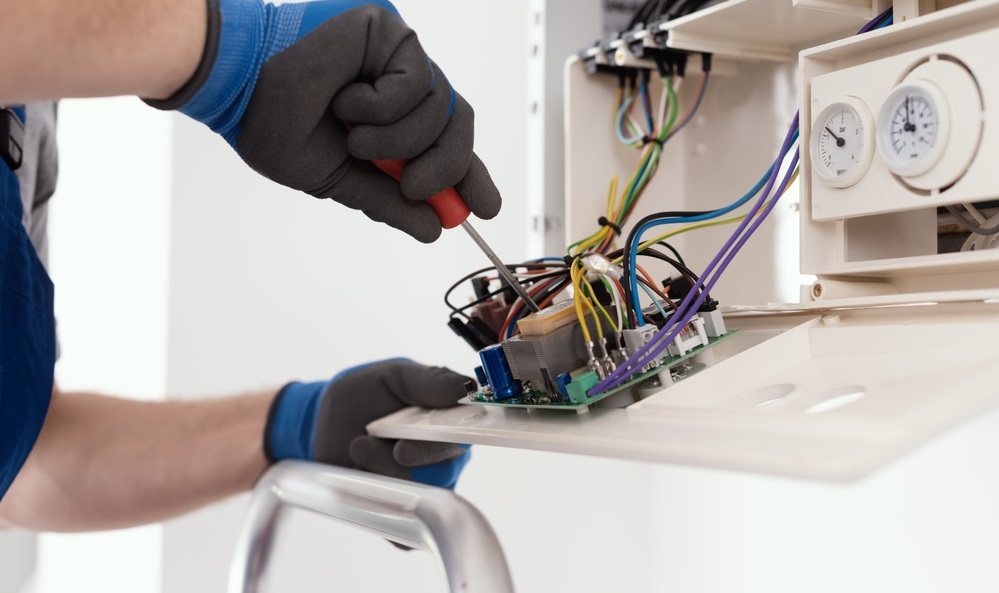 Boiler PCB Faults – How to diagnose a faulty printed circuit board

The printed circuit board or boiler PCB is figuratively and literally the brain of a modern boiler. Considering its essential job as the central hub of your hot water and central heating system, the last thing you want is to have something happen to it. If the PCB fails, so does your boiler.

Irrespective of its age and model, your boiler requires a PCB to function. If the PCB has an issue, your boiler struggles when supplying your home with heating and hot water. The moment you think that your boiler’s PCB is damaged or faulty, the first thing is to enlist the services of an emergency repair engineer. But the cost of changing a faulty PCB unit can be pretty steep.

This article looks at common PCB faults, their causes, and how much it can cost to replace a faulty boiler PCB.

What Is a Boiler’s PCB?

As stated earlier, a boiler PCB is the nerve centre of a boiler. At this control hub, all the parts of your boiler talk to each other to ensure functional synchronicity. The role of the PCB is to synch all boiler components, ensuring that the boiler continuously functions as it should.

If a part of the boiler is malfunctioning and causing the boiler to operate under conditions that could damage components or cause harm to those in the home, the PCB triggers a boiler lockout. The PCB is responsible for monitoring temperatures, pressure, and boiler currents to ensure that these metrics are within the optimal range for the boiler’s efficient and smooth running.

For example, before the pilot light is activated, the PCB begins a checklist to ensure that every boiler part is working correctly. It does this by first signalling the fan to start operating; this lets it create a pressure change that eliminates the dangerous gases created by the boiler when it is in operation. As soon as the PCB gets information that the fan is working as it should, it can certify that the boiler is safe for operation, thereby igniting the boiler.

Conversely, if the PCB senses the fan isn’t working, a gas valve is faulty, or there is a broken thermistor, it then instructs the boiler to stop functioning and displays an error code. Sometimes if you have an older boiler it may be better to find out how much a new boiler costs as it may be more economical in the long term.

The Causes of Boiler PCB Faults

Just as with any other mechanical part, age can hamper the efficiency of a boiler’s PCB. With frequent use over time, the boiler components get subjected to wear and tear. For example, after being used for years, chances are the PCB in your boiler has developed fractures and cracks in its internal structure, which in turn cause it to malfunction. In all, the leading cause of boiler PCB faults is old age-associated wear and tear.

Nevertheless, if your boiler is still new, it could be confusing to recognise the tell-tale signs of a PCB fault. Considering that old age is out of the question, you might have a hard time figuring out the fault.

When your PCB develops a fault in a new boiler, it could be one of three factors: damaged solder joints, water damage to the internal components, and boiler vibrations. A certified boiler engineer must conduct a fact-finding mission to discover which factor is responsible for the boiler’s faulty PCB. Once they identify the issue, the engineer can attempt to fix it or replace the PCB unit if necessary.

With that in mind, let’s look closer at the three factors that can cause the boiler’s PCB to develop a fault.

Naturally, the electronic components that create the PCB are soldered on. As time passes, wear and tear could cause the solder to deteriorate and even break off. This causes the boiler’s PCB to break down or malfunction. And while a certified boiler repairman can sort some solder joints on the spot, there isn’t a guarantee that they will hold. The most effective fix is to get a new PCB unit.

We all understand that electricity and water do not mix. And since the PCB is chockfull of electronic components, coming into contact with water could be dangerous for it. PCB units can be water-damaged from leaks coming from the pump or a faulty heat exchanger in certain instances which, in turn, causes hotspots where the wiring is weakened. Over time, the weak areas crack, causing water to leak and rip onto the PCB’s components.

Conversely, a pump could begin leaking if it has been subjected to excessive strains or is old. For example, if a pump has sludge accumulation or operates at high speeds, these scenarios will create high pressures that can seamlessly blow the seals. The worn seals will then let water inside the boiler, which damages the PCB unit and other electronic components.

Every oiler naturally produces slight vibrations and noises when functional. However, you can blame boiler vibrations for your PCB fault if you notice that your boiler is a lot noisier than it should be. This noise typically precedes a clear PCB fault.

Considering most boiler components, just like the PCB, are fragile, excessive vibrations could cause the boiler chip and other connections to the PCB to fall off or loosen. The vibrations could also cause some wires on the PCB to become damaged, resulting in a boiler PCB fault.

Before getting into signs of faults, it is imperative to highlight again that the PCB is a boiler’s brain, which means it isn’t something you should mess with. Only a certified engineer should handle it. Tampering with the PCB could mean putting the boiler out of commission, which isn’t something you want to happen.

Another thing to consider is that while you might be tempted to just restart your boiler when you get locked out, that is something you shouldn’t do. The fact that you have an error or fault code on your boiler means something is wrong with it. Restarting it means giving it a temporary fix when the issue might be serious.

With all that settled, it is time to look at a few of the most widespread signs of a faulty boiler PCB.

Boiler shutting off before getting to the required temperature

If your boiler turns off before the water gets to the right temperature, it could result from a miscommunication between the temperature sensor located on the NTC thermistor. For example, if the thermistor makes the PCB think the water has gotten to sufficient temperatures, the boiler is switched off.

As stated earlier in the article, a PCB unit first confirms that the fan is operating normally before starting the boiler. Once this is done, a signal from the PCB opens the gas valve, giving the burner a steady stream of gas. Nevertheless, if the PCB doesn’t fully communicate with the gas valve, it could be due to an electrical fault between the two.

This lack of communication between the gas valve and the PCB could mean that the gas valve opens intermittently or not at all. This fault could also cause the gas valve to be open either fully or partially when it should be shut, causing the boiler to terminate operations due to the potentially dangerous conditions.

The most effective way to determine if the fan not running due to a PCB fault is to have a registered engineer conduct an electrical troubleshooting procedure, including examining the fan, the air pressure switch, and the PCB. Once damaged wires or loose connections are detected as the cause of the fault, they are replaced or fixed.

No power on the boiler’s display panel

If you haven’t suffered from power cuts, but the boiler’s display is blank, it could be that power isn’t getting to the PCB. It could also mean that the PCB has simply stopped functioning. The repair engineer will open up the boiler to analyse the components and determine if the PCB unit is indeed damaged.

The PCB shows a memory fault

Suppose you discover that the boiler’s display panel has a “memory fault”, which means that its PCB is misconfigured. This error is prevalent among newly installed boilers or boilers that have replaced their PCB.

If the boiler is new, you can simply solve this problem by entering the recommended product code found in the boiler user manual. The job of the product code is to synchronise the boiler with the PCB, causing the error code to disappear.

But, if the boiler’s PCB is replaced, the above fix might not work since the repair engineer would have tested the boiler before certifying it ready for use.

Boiler giving off a burning smell

If you notice a burning smell from your boiler, intermittent operation, and the boiler displaying fault codes associated with electronic failures, this is bad news. The most likely reason for such a fault is your PCB is damaged by water leaking from the boiler.

The burning smell is typically a result of moisture dripping onto the connections on the PCB, which, in turn, results in burnout. Should this be the case, the boiler repair engineer will have to isolate and then fix the leak. Once the leak is fixed, the engineer can then move to replace the PCB unit.

Display panel is not lighting up

If you discover that your boiler’s interface is blank, isn’t lighting up, or intermittently displays blue, red or green lights, chances are there is a loose connection between the interface and the PCB. Nevertheless, you should also note that some boiler manufacturers have designed their boiler interfaces to flash when there is a fault. This means that this fault might not be a result of loose wires.

The best way to determine if this is the case with a faulty PCB is to have a registered boiler repair engineer open up the boiler and investigate if there are any loose connections. Doing this makes the repairs possible, if necessary.

How Much Does It Cost to Replace Boiler PCB Faults?

If this price makes you reconsider changing your boiler PCB, you might consider getting a reconditioned or refurbished PCB unit. However, you should note that the savings are typically worth it since the refurbished unit doesn’t come with a warranty and can simply stop working after some time.

If the boiler in question is old or out of warranty, it might be better to consider a new energy-efficient boiler instead of simply patching up an old one with a new PCB unit.

On average, a certified engineer can diagnose boiler PCB faults and replace the unit in 1 to 2 hours. Nevertheless, if the certified boiler repair engineer doesn’t have your PCB available, you might need to wait longer to get your boiler back up and running.

Q What kind of fuel does your boiler use?
By Myles Robinson Posted on 20th June 2022 // Troubleshooting