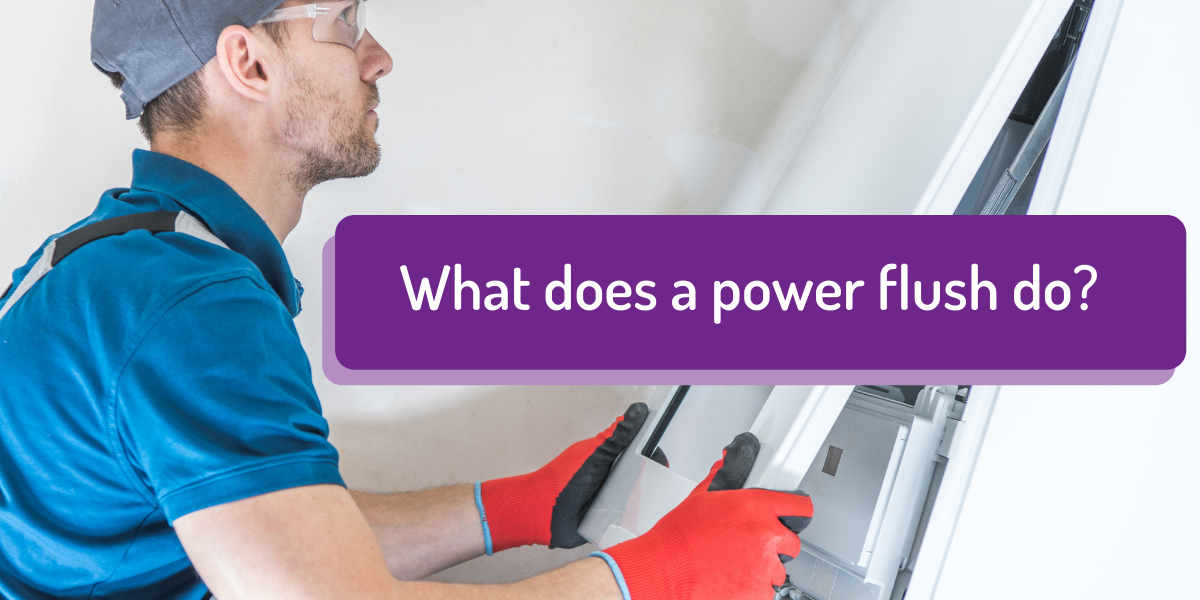 It’s no secret that boilers can be expensive to fix and replace. Most homeowners’ hearts sink when they realise something’s wrong with their central heating system.

Some problems can be done yourself, like bleeding your radiators or draining your central heating system, but other times it’s necessary to call in the experts.

The good news is that engineers can fix many boiler problems simply by doing a power flush. And if they can’t (or their quote is too high), we can help you find a new boiler at a fair price from the comfort of your sofa.

But before you go making any hasty decisions, it might be worth reading a bit more about the subject so you can make the choice that’s right for you.

What does a power flush do?

If your central heating system is clogged up with sludge, dirt, limescale, dust and other debris, an engineer can fix the problem by using a specialised machine to pump chemicals through your pipes, radiators and boiler at high pressure in order to clear the blockage.

A power flush takes between one and two days to complete and typically costs between £300 and £500 (depending on the size of your house), but it can be worth it as it helps to improve the lifespan of your boiler and ensures that your central heating system is working efficiently.

In this guide, we’ll go through the signs to look for to tell if you need a power flush, explain exactly what the process involves and answer some of the questions you might have. Then you can decide on what’s the right solution for you.

How does a power flush work?

A power flush is the most effective way to remove blockages in your central heating system, allowing water to flow through it freely.

There are a number of stages involved in the power flushing process:

How long does a power flush take?

Depending on the size and condition of your central heating system, this whole process could take anything from a few hours to two days to complete. To give you an indication, it takes around six hours to power flush a three-bedroomed house, provided the problem isn’t too severe, the system isn’t particularly complicated and none of the parts needs replacing. If you have a combination boiler or sealed system, it could take less time because the engineer won’t have to cap off the cold feed or expansion piping.

Will power flushing get rid of all the sludge?

Although it will remove a large portion of it, a power flush can’t remove all of the sludge in your system. However, if you’ve got a combination boiler, you can ask your engineer to remove the hot water heat exchanger and flush it separately on both sides before refitting it, in order to get rid of as much as possible.

How do you know when you need a power flush?

From bacterial growth to incorrect installation, a number of things can cause contamination in your central heating system.

While it’s not always possible to see the problems caused by blockages, you can tell when your system is heavily contaminated by looking out for the following signs:

You can also try attaching a magnet to copper pipework, as this will indicate whether any iron sludge has leaked into it.

Is power flushing the right answer?

Every new boiler will get a ‘dynamic flush’ using clean mains pressure water anyway, but if you have an old central heating system and you’re getting a new boiler installed, it’s advisable to have an engineer check the PH balance of your system to detect any corrosive elements and determine whether a power flush is needed as well.

Some of the benefits of power flushing include:

However, it’s not always the answer. If, for example, there’s a broken part in your boiler or there’s a loss of pressure, power flushing won’t fix it. It’s also not as effective on boilers and systems that are older than 15 years and if there are areas of weakness (like rusty radiators), the pressure from power flushing can cause leaks. Radiators with twin entry valves and electrical heating systems can’t be fixed by power flushing either, and if your pipework is narrower than 15mm in diameter it will need an alternative solution.

If it’s just one or two radiators that aren’t working correctly, it might be possible to have them chemically flushed without using a pump. This could help with the upkeep of the system and address any localised problems between power flushes.

How often do you need to do a power flush?

Whether it’s a simple system flush with clean water or a full power flush on a contaminated system, building regulations advise that a suitable cleanse is carried out when any new boiler is fitted. This is to ensure that your new central heating system doesn’t adopt any of the problems your last one had. It’s also a good idea to get one if you decide to add a new radiator.

It’s recommended that you get your boiler serviced every year so that your engineer can visually inspect the whole system and identify any areas that have been damaged by corrosion. How much debris builds up in your system mainly depends on the type of metal that’s used for your heat exchanger (copper heat exchangers don’t corrode as quickly as the steel in your radiators does) and whether pipework is vulnerable because different metals have been used in the joints.

As long as you maintain your system properly, you should only need a power flush once every five years.

There may not be any rules stating that an engineer must be Gas Safe registered to perform a power flush, but you must ensure that the person doing the procedure is competent and able to do the job properly. You should never attempt to do it yourself, especially if your boiler needs opening up or there are other faults in your central heating system which need looking at. As well as the fact that there are risks involved in using specialised chemicals, a mistake could mean your heating system performs worse than it did before. Plus, you run the risk of invalidating your warranty, leaving you in the lurch if something goes wrong.

A power flush should always be performed by a qualified professional. If you think your central heating needs a power flush, you should book an engineer to come and look at it as soon as possible. Qualified engineers will always carry their Gas Safe identification with them, which you can ask to have a look at if you have any doubts about their competency. They’ll also give you a certificate to prove that the work has been carried out by a professional.

Top tip: If you can, consider booking a power flush in the summer when central heating engineers are less busy. They’re still available in the winter months, but you may have to wait longer for an appointment as everyone is using their boilers then and breakdowns are more common.